And if Venice isn’t disorienting enough, there’s always the Venice Biennale waiting to transport you to an alternate reality every two years.

An international contemporary art extravaganza for the senses, the Venice Biennale fits right in with the disorientation provoked by the city itself.

The first time I experienced the Biennale in 2001, I was completely blown away. The distinctions between art and life were so blurred that it seemed like I had stumbled into a new dimension. I felt the same euphoria when I visited in 2005 and earlier this summer (2015).  Simply put – there is an insane amount of art  — two days is barely enough to “see” it all. Even after my most recent visit, I realized that we’d once again failed to make it all the way to “the end.” This doesn’t even take into account all of the numerous installations throughout the city of Venice as well as all of the events and performances that occur over the six months that the exhibition runs. Such has always been the case with the Venice Biennale — there’s always more to experience.

Not only is there an overwhelming amount of visual art from all over the world, many works are often participatory and multi-sensory. I’ve climbed through structures, wandered in sound environments, encountered smells that accompany the visual. I’ve been encouraged to touch unfamiliar objects, play games, type secret messages, choose whether to notice or ignore humans who are a living part of an installation, as well as been invited to sign a contract that “I would always be honest, no matter what.” (I declined that one).

The Biennale is like entering a world where every person, every object, every experience could potentially be part of a calculated art piece. Or every sensation or object could simply be part of the everyday world around you. Some Biennale visitors dress up to become walking pieces of art performance. People from all over the world share in the spirit of possibility that emerges from experiencing an immersive art environment together. Adults and children wander, play, discover, and stand in awe and puzzlement contemplating what it means and perhaps more importantly, what it feels like to be completely surrounded by art. For me, one of the best parts of the Biennale is sharing the experience with others and gaining insight into the possibilities offered by a temporary world that privileges a reality of art.

What’s shocking is that I never knew this world existed until 15 years ago. Similarly, many other people I’ve talked to since have never heard of this extravaganza of art — what many in the “art world” consider to be one of the largest and most prestigious exhibitions in the contemporary art scene. Often wandering tourists are surprised to discover this alternate art reality co-existing alongside the city of Venice itself.

It’s no accident. Venice is the ideal location for such an artistic feast of the senses. It’s my hope that more and more people learn about the Biennale and visit in the years to come. In my mind, the more people who can share in the inspiration, exhilaration, and sense of tranquility made possible in a world where the distinctions between self/other and art/life truly begin to fall away, the better.

A few examples of some multi-sensory and participatory installations I experienced at this year’s 56th Biennale:

Strategically installed speakers play an original composition made on the glass armonica* and invite visitors to wander throughout the pavilion. Gallery walls are replicated as broken glass planes lying on the floor creating a symbolic rupture in the space. 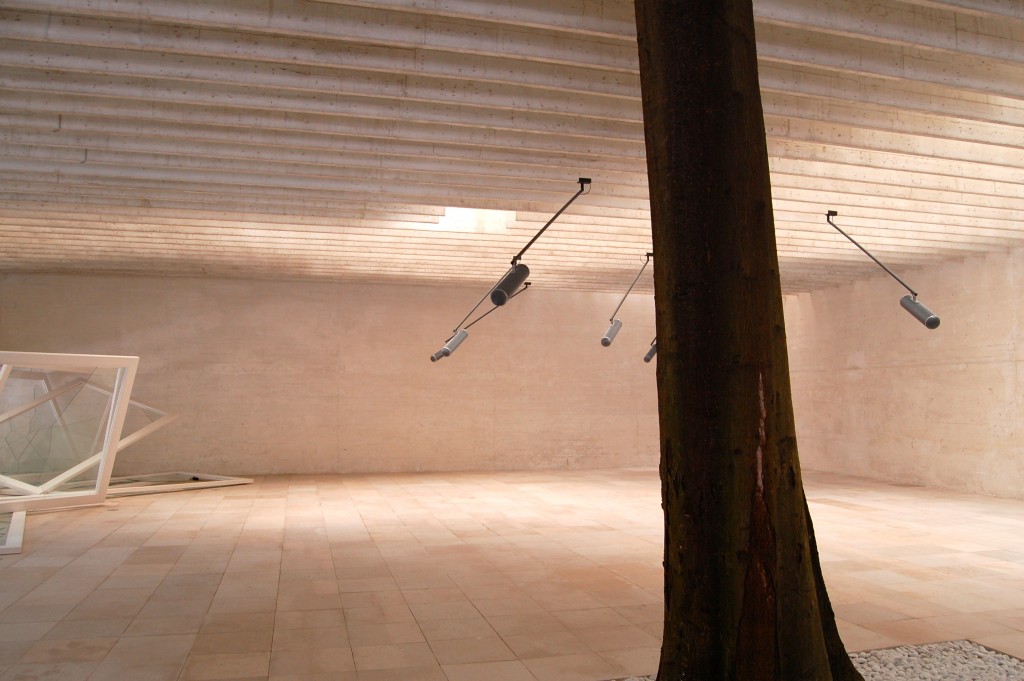 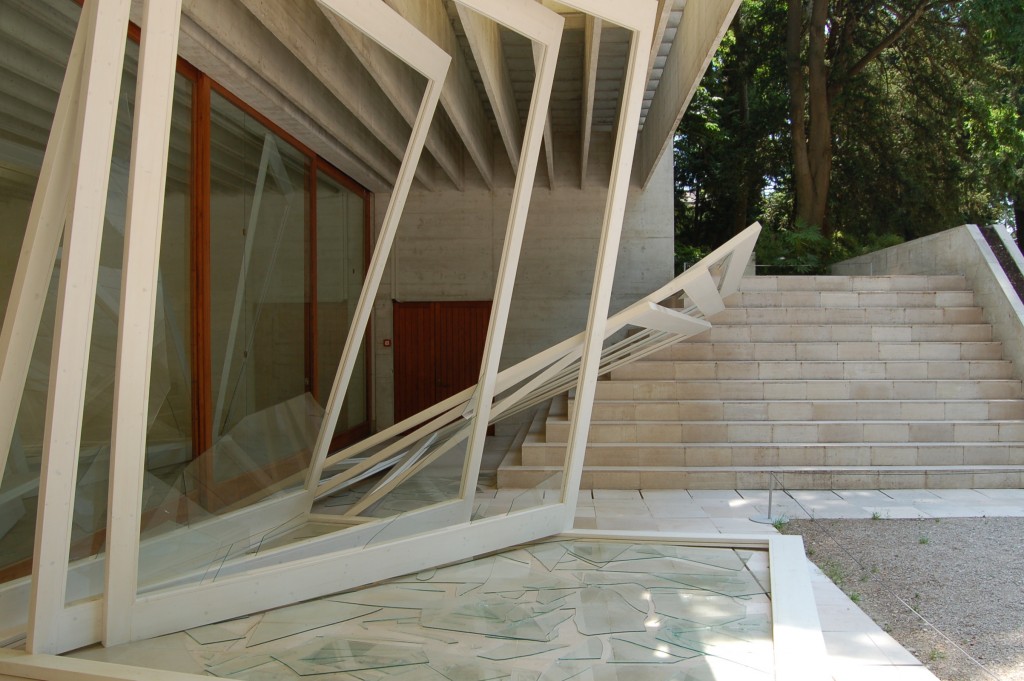 Outside of Nordic Pavilion, part of Camille Norment’s “Rapture”*

* “the glass armonica, [is] a legendary 18th-century instrument that creates ethereal music from glass and water…the glass armonica was at first celebrated for curing people with its entrancing music, but later it was banned because it was thought to induce states of ecstasy…If it had the power to cure, so the logic went, this bewitching instrument might also have the power to kill through over-exciting its listeners.” — from exhibition text

Multisensory environment where inside/outside become blurred and the scent of organic components painted on the walls (such as hormones and bacteria) permeate the space. The installation culminates down a long tunnel that ends in a bubbling pool filled with flesh-tone colored liquid and illuminated by buzzing fluorescent lights. 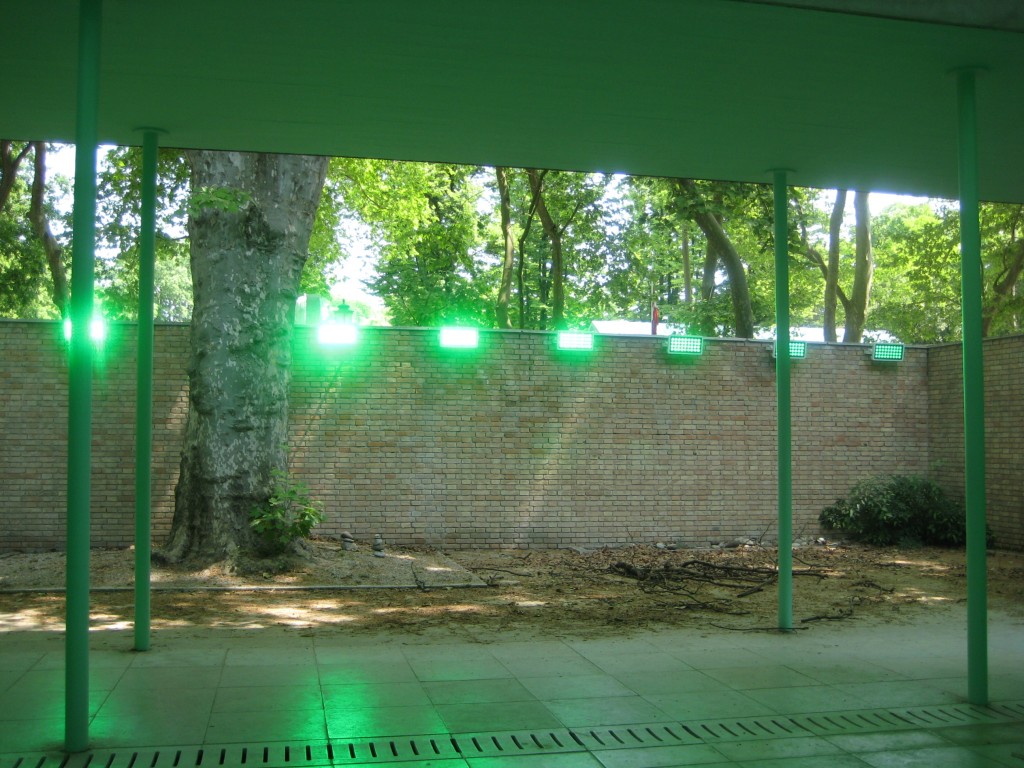 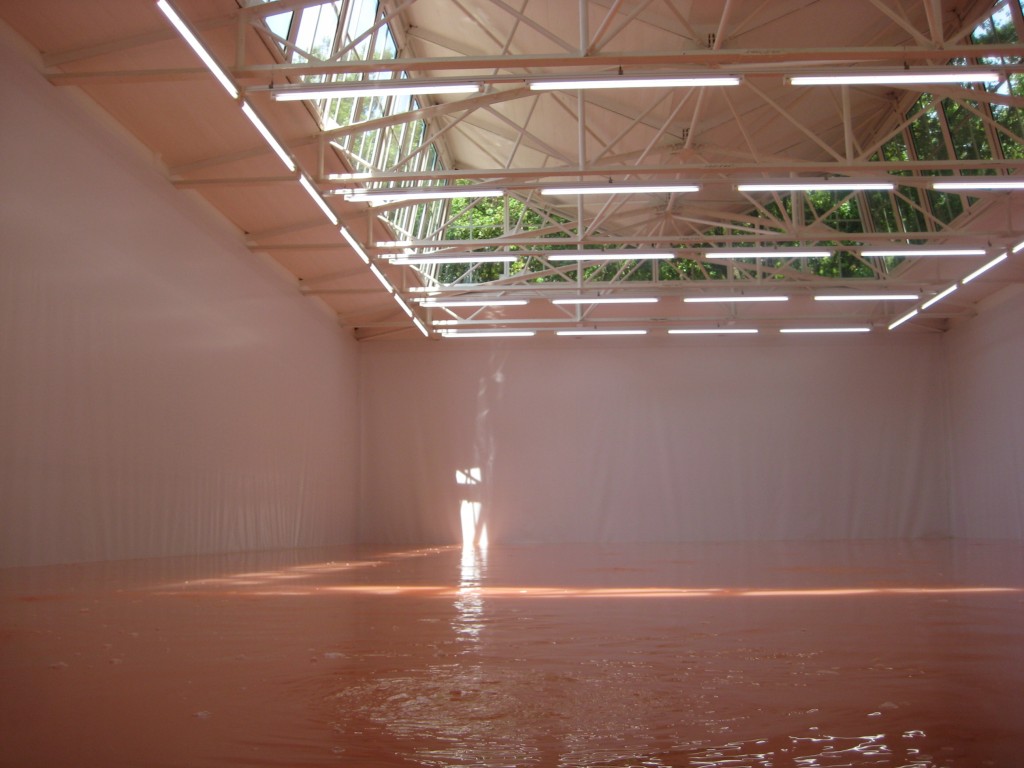 Visitors are encouraged to climb through the exhibition via holes punched through multiple walls. The feeling of trespassing and violation of space is part of the discovery. Partial views of other gallery visitors from the interior rooms give a sense of seeing without being seen. 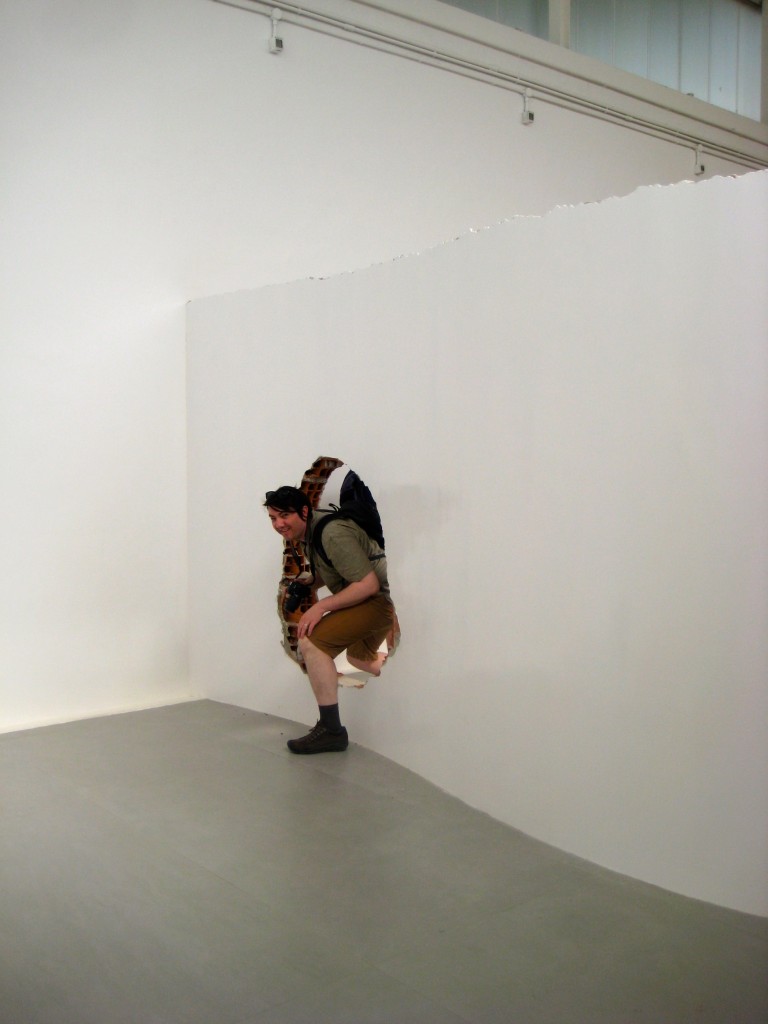 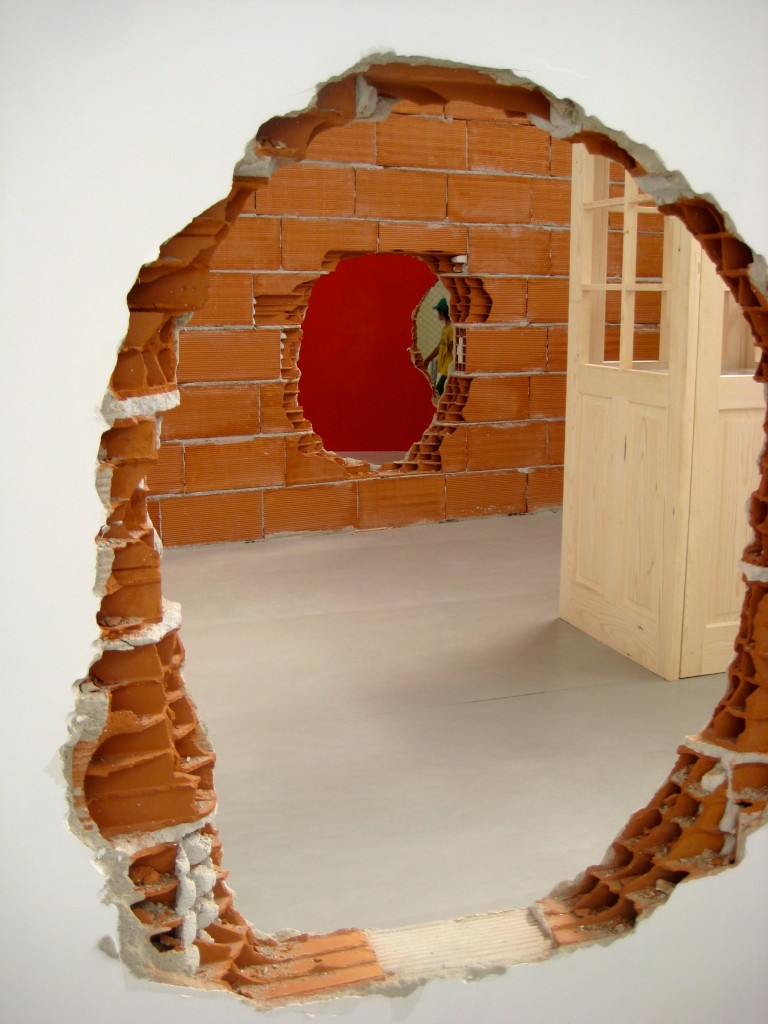 Live trees move slowly throughout the gallery and outside the entrance, so slowly that visitors do not notice the movements at first. The momentum of the trees is determined by their metabolisms and changing exposure to sunlight. The movements are also translated into sound that is dispersed throughout the space. The dance of the trees to their own music can be viewed from faux concrete steps on either side of the pavilion – the softness of the foam lounging space an inviting place for collapse. 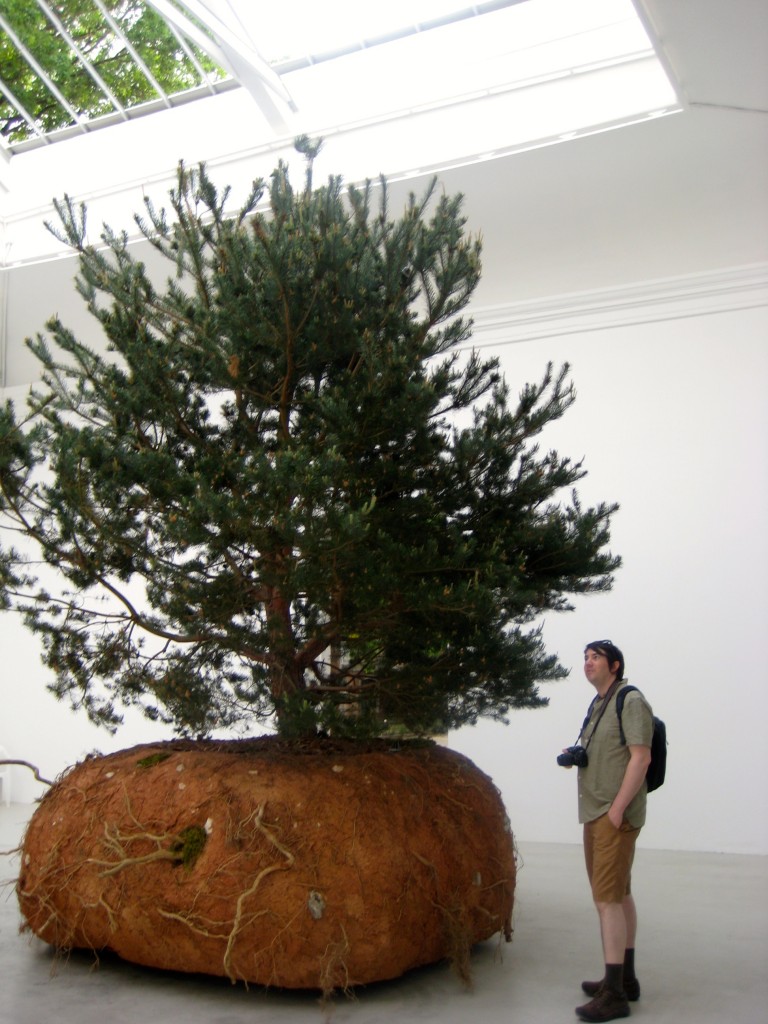 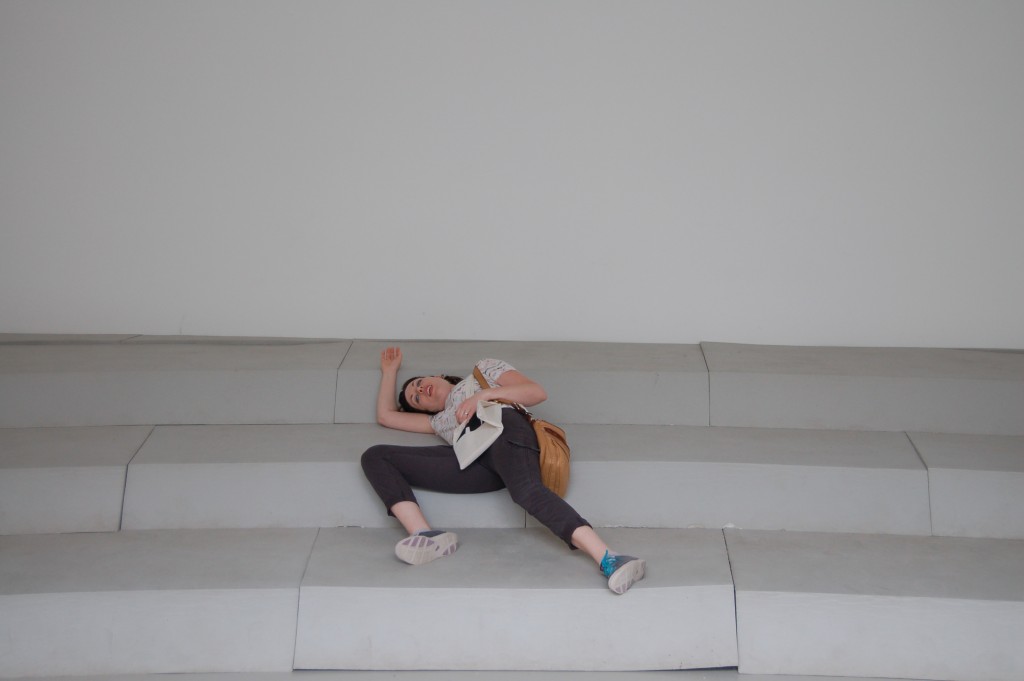 Collapsed on the faux concrete steps in the French Pavillion. Nice place for a nap or to watch the trees dance. Céleste Boursier-Mougenot, “rêvolutions”*