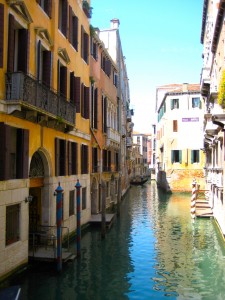 Venice is disorienting and of course, it’s sinking.

Venice requires you to give in to a state of being temporarily always lost — lost in a maze of water and bridges, not to mention literary and historical references.

It’s virtually impossible to resist, even for the most experienced of travelers. The number of famous artists, authors, musicians, and actors who have been inspired by the city’s foreboding beauty while wandering its narrow streets is too exhaustive to list. Venice is never just a backdrop, it is always part of the story itself. 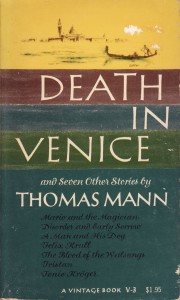 Film adaptation of Henry James’s novel, The Wings of the Dove 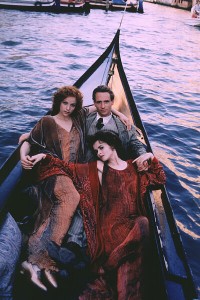 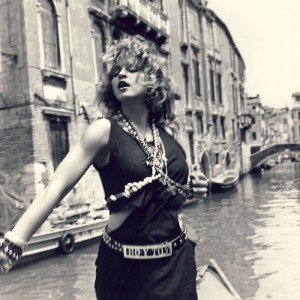 After a visit, the allure of Venice still haunts my daydreams and the rush of excitement when boarding the first vaporetto of a trip never wanes. I’ve learned that I should just surrender my senses to the floating city immediately upon arrival. There’s no point in trying to resist — disorientation is inevitable, and honestly it’s part of the fun. Getting lost. Over and over. Triumphantly finding your way back to a familiar landmark, piazza, or cafe. 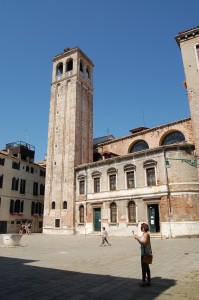 The innumerable alleys, bridges, reflections, and shadows always overtake my sense of direction and disorient my perceptions no matter how many times I think that I’ve walked a particular alley or crossed a certain bridge. Although it’s no wonder, since Venice has over 400 bridges and 150 canals! In short, NOT getting lost is not an option. And maps are only so helpful.

And herein lies the fascinating secret to this maze-like adventure of a city — no matter how lost you get, you can never get completely lost since Venice is an island. Once I realized this fact, I gained a new-found sense of adventure, ready to explore further into the depths of the outlying neighborhood sestieri.

The spirit of discovery, this openness to becoming part of the landscape becomes a type of performance. By learning to look at seemingly familiar landmarks in new ways and allowing your sensory awareness to reach new heights, you can become part of something much larger than yourself. This is the story that Venice will weave around you, if you allow yourself to become disoriented by the floating city.

To truly experience Venice is to become part of the city’s performance — as a tourist,  walking through mazes of historical and literary references, reaching the dead-end of a calle filled with exhaustion, bearing witness to innumerable religious icons embedded within ancient walls, while inhaling the mysterious smells of the canals and waterside restaurants as the chorus of bells toll to mark your performance of being lost.

Although my relationship with Venice has become increasingly adventurous, I haven’t yet experienced the literal sinking of the city. I can’t imagine the disorientation caused by wandering (or swimming) the flooded streets during an acqua alta.  As described by Fodor’s, acqua alta is “a natural phenomenon that has occurred for centuries when especially high tides caused by the moon’s gravitational pull coincide with a strong scirocco, a warm wind blowing across the Mediterranean that forces water from the Adriatic into the Venetian lagoon. This coincidence happens from about the middle of October to the beginning of December.”

Although it does make for a great photo opp for some. Venice as performance indeed. 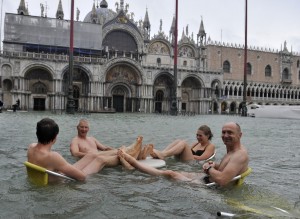 Cafe life during the 2012 acqua alta – photo by Luigi Costantini