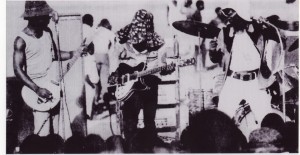 the WITCH in concert at Matero stadium, Lusaka, 1974

There is nothing that compares to the exhilaration of discovering music that truly moves you.

More intense is hearing for the first time a group from almost 40 years ago that you immediately connect with. Even more shocking is when that band is hugely unknown and unrecognized. Most recently all three of these mind-blowing experiences happened to me all at once with the psychedelic rock 70s band from Zambia — the WITCH.

I’ve spent the past two days (and surely many to follow) listening obsessively to the excellent 4 disc/6 LP retrospective of their work released in 2012 by Now Again Records.  An acronym for “We Intend to Cause Havoc,” the WITCH played over the course of only five years (1972-77) some major fuzzed out psychedelic wah wah mind groove to get lost in and found in again — music that is literally missing from psychedelic rock history.

The story of the WITCH is a rise and fall, sadly typical of many African rock bands that emerged following the end of colonial rule. Swept up in the enthusiasm following Zambia’s independence from the UK in 1964,  Zamrock bands proliferated in the capital of Lusaka, many inspired by psychedelic rock from Europe and the US played on the radio. You can hear the Rolling Stones influence in some of the WITCH’s earlier work like on the track “It’s Alright”:

The WITCH moved into heavier territory at the height of their success, performing concerts that lasted six hours or more, often playing their hits 2 or 3 times over just to satisfy audiences late into the night. Jagari’s stage antics became the stuff of legends as he was known to jump off balconies into the audience and wear outrageous costumes.

Their third and most popular release, “Lazy Bones” (1975) clearly demonstrates their place in 70s psychedelic music history. You must listen to the release in its entirety, you owe it to yourself!

While there’s an absence of any footage of their live performances, especially when compared to other Afro-rock greats such as Fela Kuti,  online photos as well as an excellent article (and inspiration for this post) by Chris A. Smith give insight into what the scene in 70s Zambia might have been like. In his article, Smith outlines the band’s history alongside the telling of his 2010 trip to interview the remaining survivor of the band, Emanuel “Jagari” Chanda. 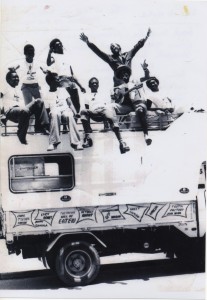 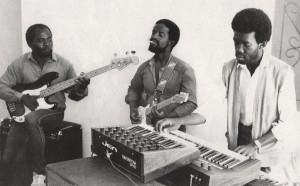 Economic hardships and the AIDS epidemic brought hard times to Zambia following the highs of independence. In addition, under increasing sanctions by the government to limit rock performances to day-time only, the WITCH eventually split up.  Like in many African nations, music was considered a potential threat to those in power due to the perceived dangers of conspiracy born from creative expression in large gatherings.

In 2013, Jagari Chanda began to tour and record again after gaining increased recognition internationally following the WITCH’s retrospective box set release — if you run across the LP box set, you should buy it without hesitation, as there was a pressing of only 1000.

Not sure if I will ever be able ever to stop listening to this band on repeat —  new dimensions to their sound keep emerging while I am amazed over and over again about what happened musically in Zambia in the 70s — a psychedelic transcendence years late in being shared with the world, but well worth the wait.