September 17, 2015 / Paget Fink / Comments Off on The Biennale Giardini and the National Pavillions

The Giardini gardens hidden on the eastern outskirts of Venice are where the Biennale was born. This tranquil park offers an oasis of possibility where the international world of art encounters the past in the present.

Green lush trees line the wide pedestrian dirt pathways that meander through shady tunnels filled with the sounds of birds and breezes. The expanse of the lagoon offers distant views where your eyes can wander the horizon. A garden oasis from the confusion of the crowded waterways and claustrophobic alleys of the city, the Giardini offers not only one of the most “natural” excursions in Venice — it also has been the center for one of the largest contemporary art exhibitions in the world since 1895. 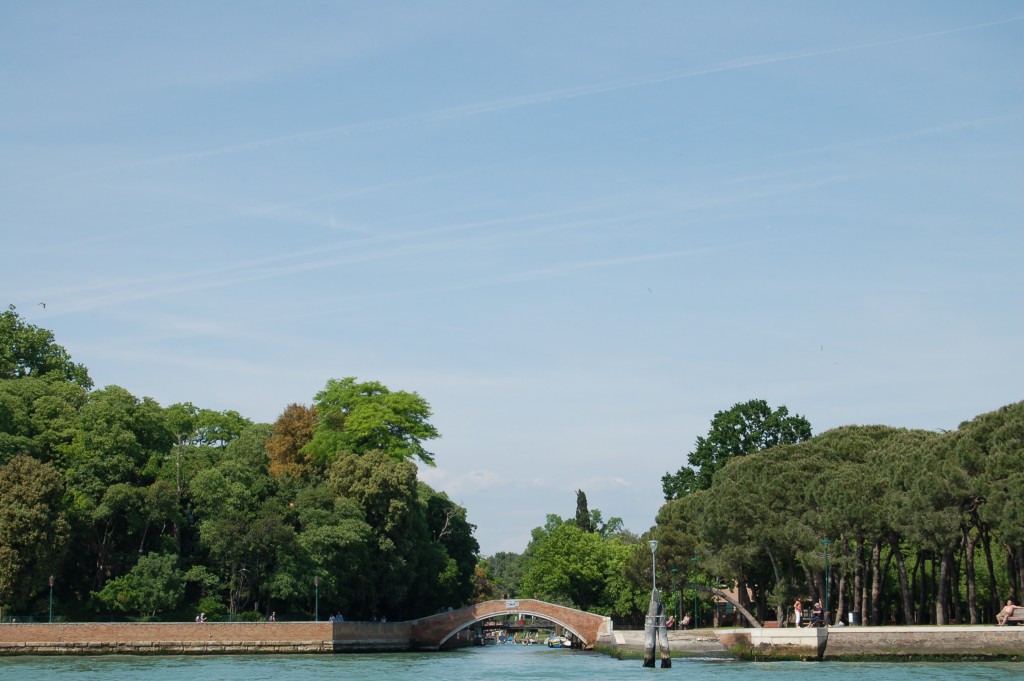 View of the Giardini della Biennale from the Venice lagoon

The Giardini was constructed following the Napoleonic invasion of Venice in 1797. This project destroyed an entire district that included four churches and three convents, and the remaining rubble was used to build new thoroughfares and a large park on top of drained marshlands nearby. Designed after the style of French gardens, the Giardini remained relatively unused by Venetians due to its distance from the city center (and more likely its association with the French) until the first Biennale was organized there in 1895 by the Venetian City Council. 14 countries outside of Italy participated in the first exhibition in 1895.  Now in 2015, over 89 countries are represented in national pavilions located in the Giardini, the Arsenale, and throughout the city of Venice. 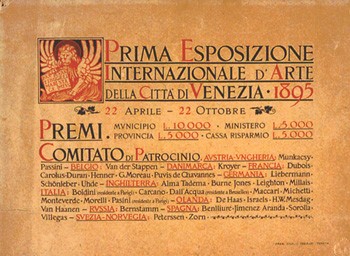 Walking through the Castello district on the way to the Giardini is a peaceful experience. It  builds quiet anticipation for the art extravaganza about to unfold. Known as a ‘locals’ sestiere, the Castello offers a view of Venice that is less frenetic and less touristy — a perfect gateway into the alternate reality of the Biennale. 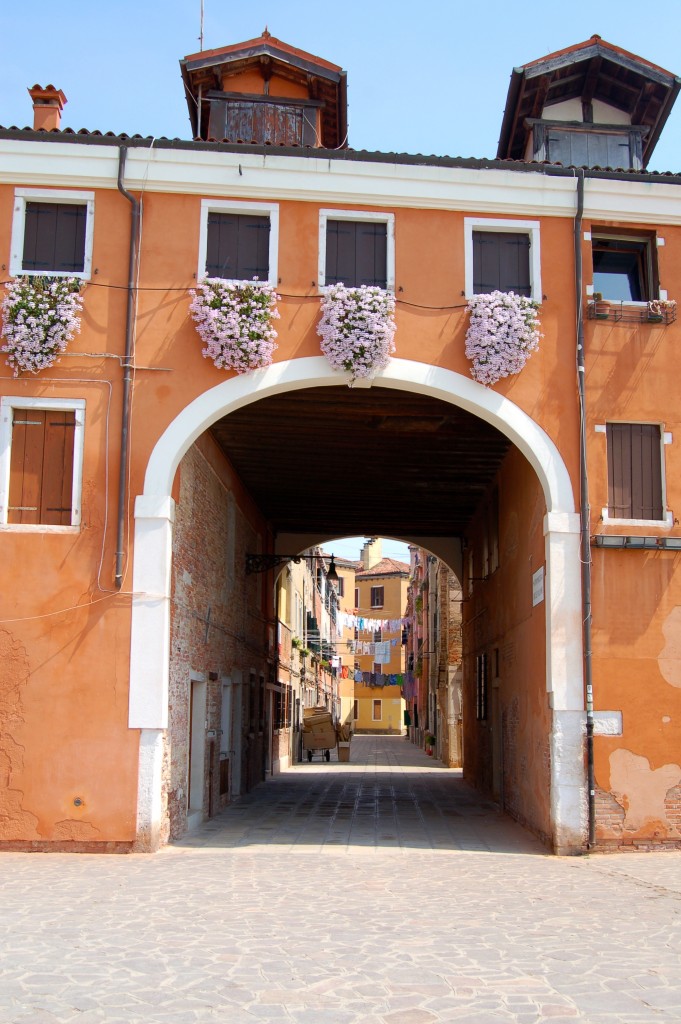 Castello district on the way to the Giardini

Arriving at the entrance to the Giardinni, everything starts to take on a surreal appearance. The permanent garden statues and structures remind visitors of the historical significance of the park’s past while simultaneously existing alongside the contemporary art experience of the present. 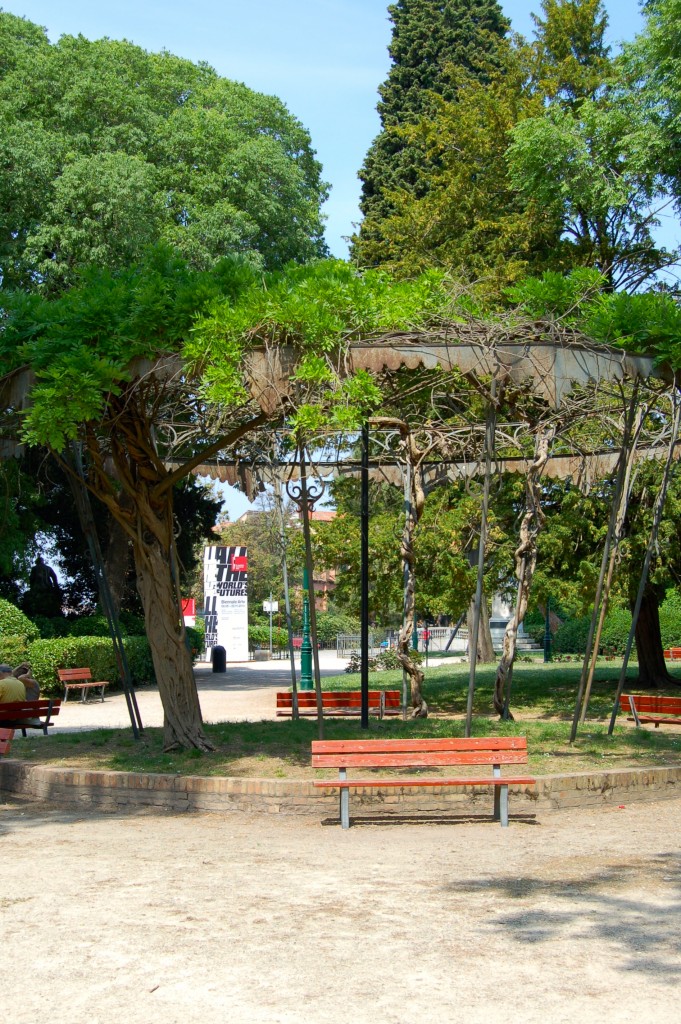 Entrance to the Giardini and the Venice Biennale 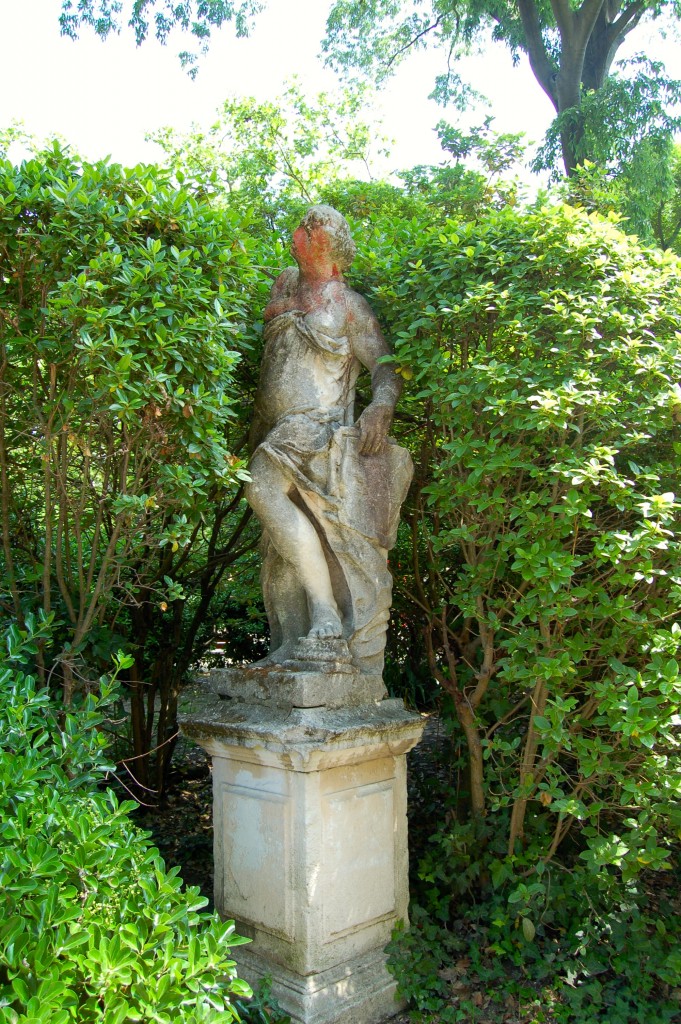 Permanent statue in the Giardini seemingly defaced by the present

Strolling down the wide pedestrian pathways it’s easy to feel like a modern-day flâneur. Leisurely walking through this 19th century park, pausing to people-watch, and  exploring the national pavilions that line both sides of the path creates a peaceful feeling very different from sterile museums and galleries. 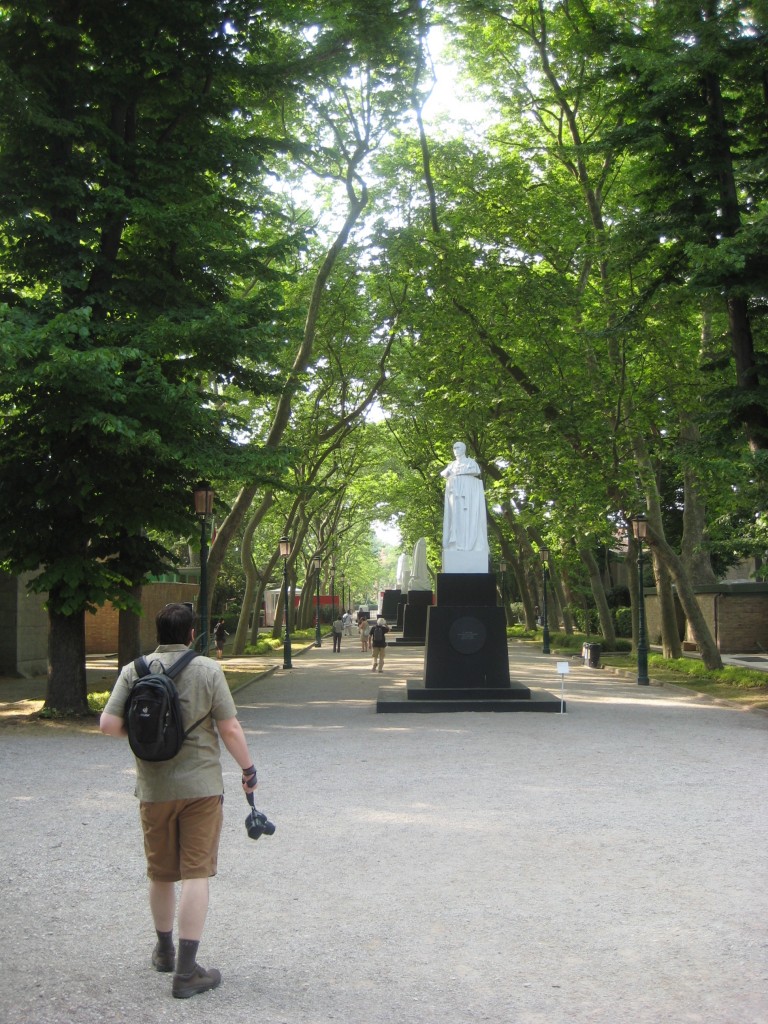 Giardini pathway with National pavilions lining each side

In 1895, 1897, 1899, 1901, and 1905, the Biennales exhibition took place in the centralized pavilion of the Giardini (now known as Palazzo Centrale) that represented artists from all participating countries. It wasn’t until 1907 that the first national pavilion was built by Belgium. Many other European countries followed suit and commissioned expo halls to be designed by architects who represented their individual countries. In this way, the architectural structures that house the art became a part of the art experience itself.

Today 26 countries have national pavilions in the Giardini, each with their own distinctive design. The building styles range from neo-classical to modern and everything in between. Many of the earlier pavilions were built with a traditional art gallery layout in mind, while newer constructions adapted to facilitate other types of multi-sensory art and installations. 14 pavilions were built during the nationalistic fervor leading up to the World Wars, while 12 have been built since WWII. The space of the Giardini is limited, so more countries now have pavilions located at the Arsenale or other locations throughout the city of Venice than in the Giardini itself.

As seen in the photos below, many artists “take over” their country’s pavilion by covering, altering, or assimilating the structure into their creations. This reusing and reimagining of space is part of what makes the Biennale so unique. The architecture of a country’s pavilion remains virtually the same while the interpretation of how to use the space changes with each exhibition. All photos below were taken during our 56th Biennale visit and demonstrate the wide range of architectural styles and modifications that make each national pavilion in the Giardini unique. 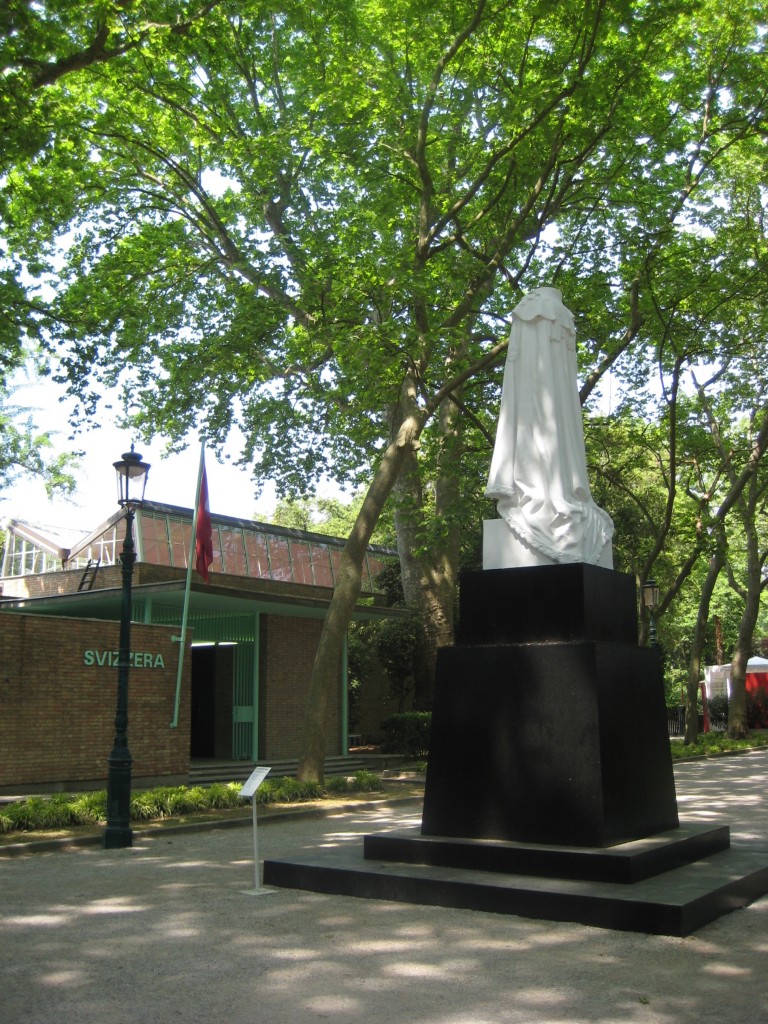 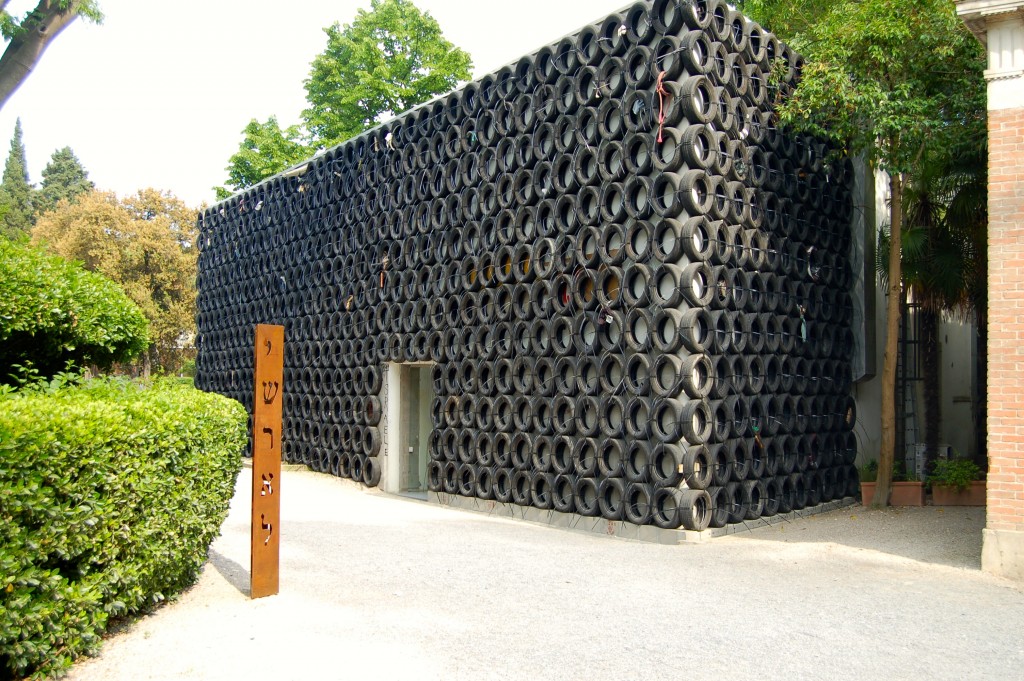 Israeli Pavilion, covered in tires by artist, Tsibi Geva, for the duration of the 56th Biennale 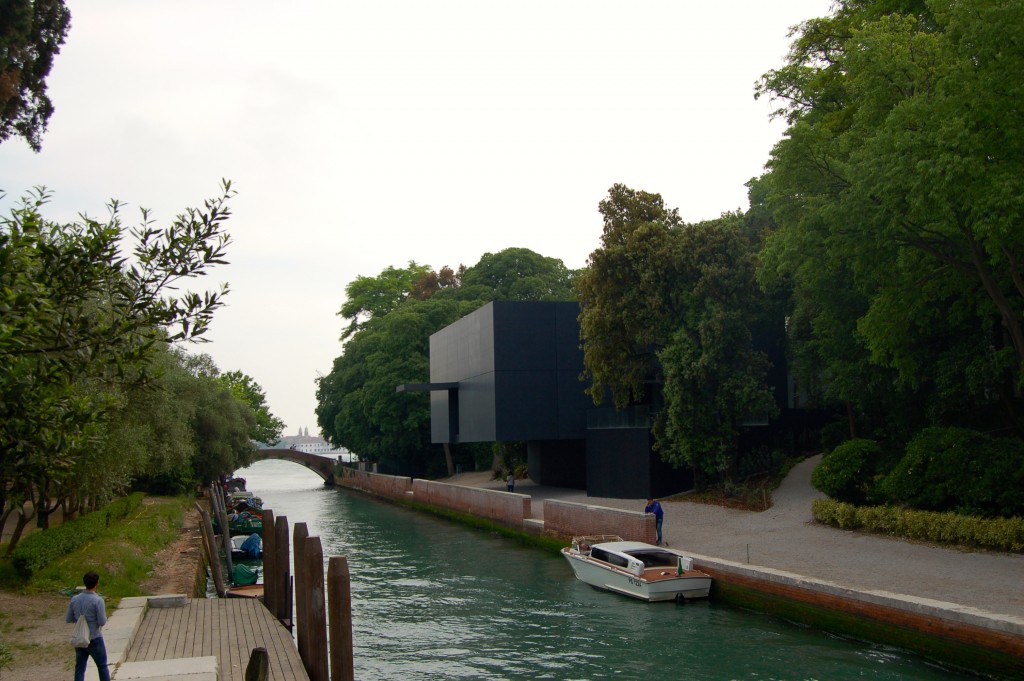 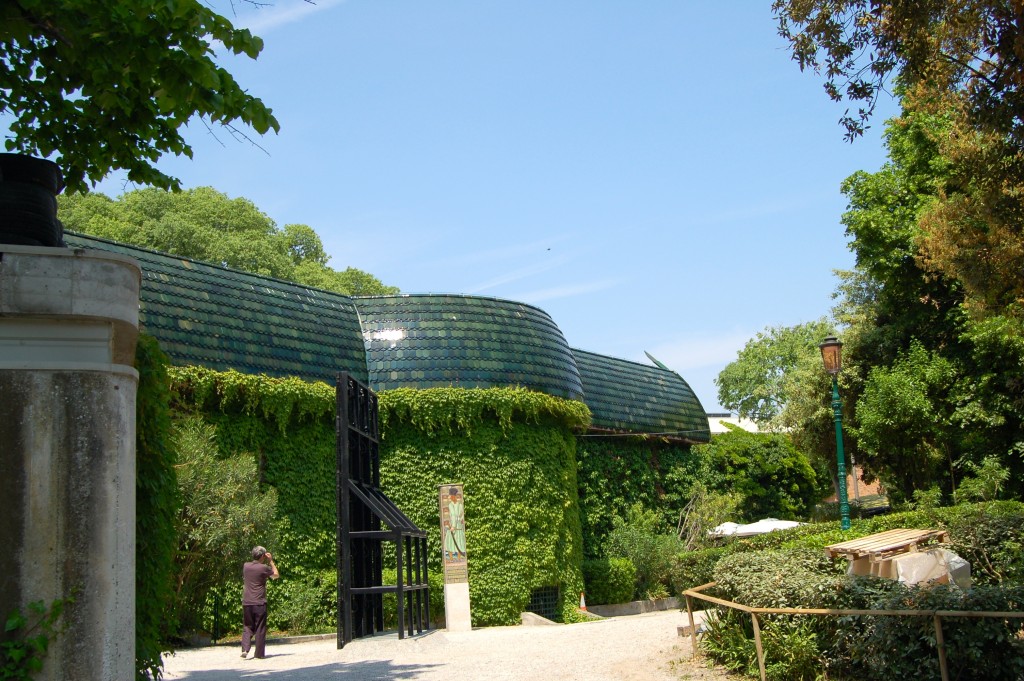 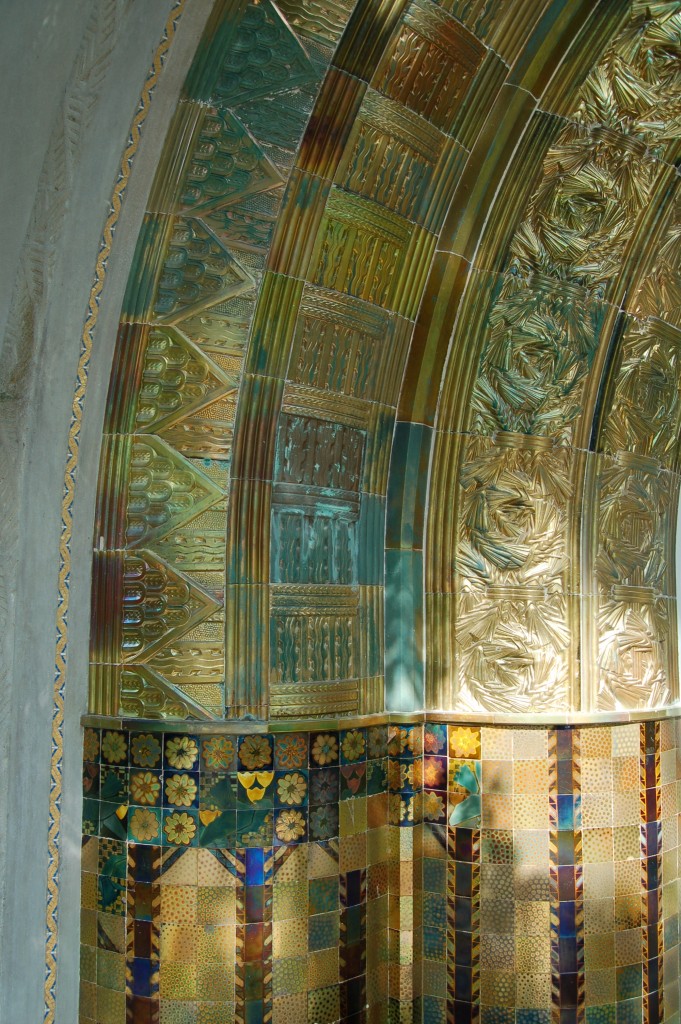 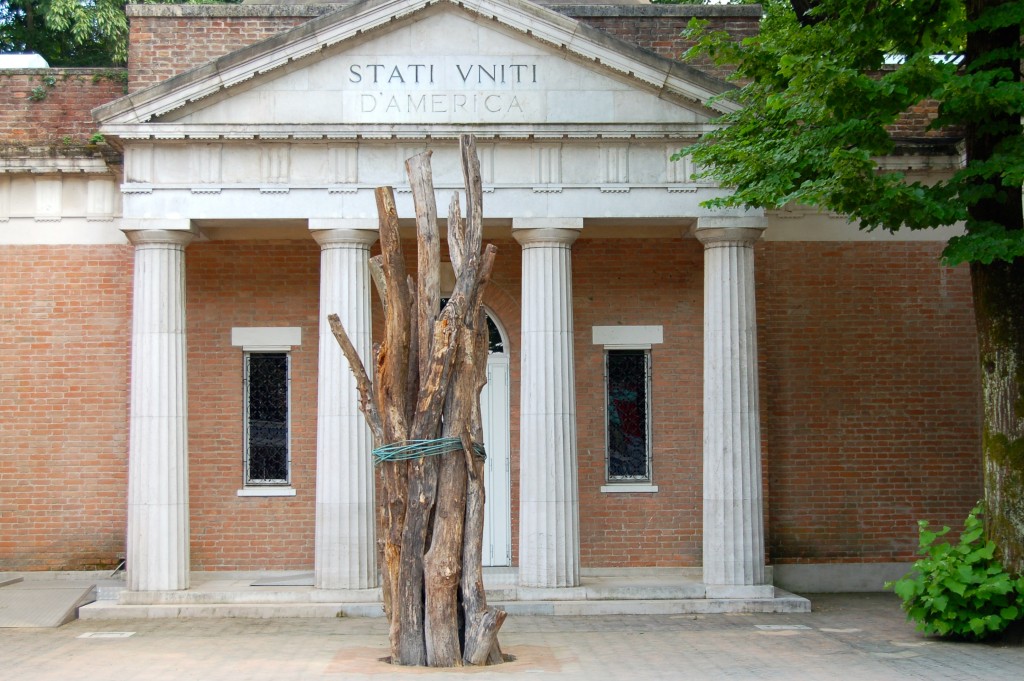 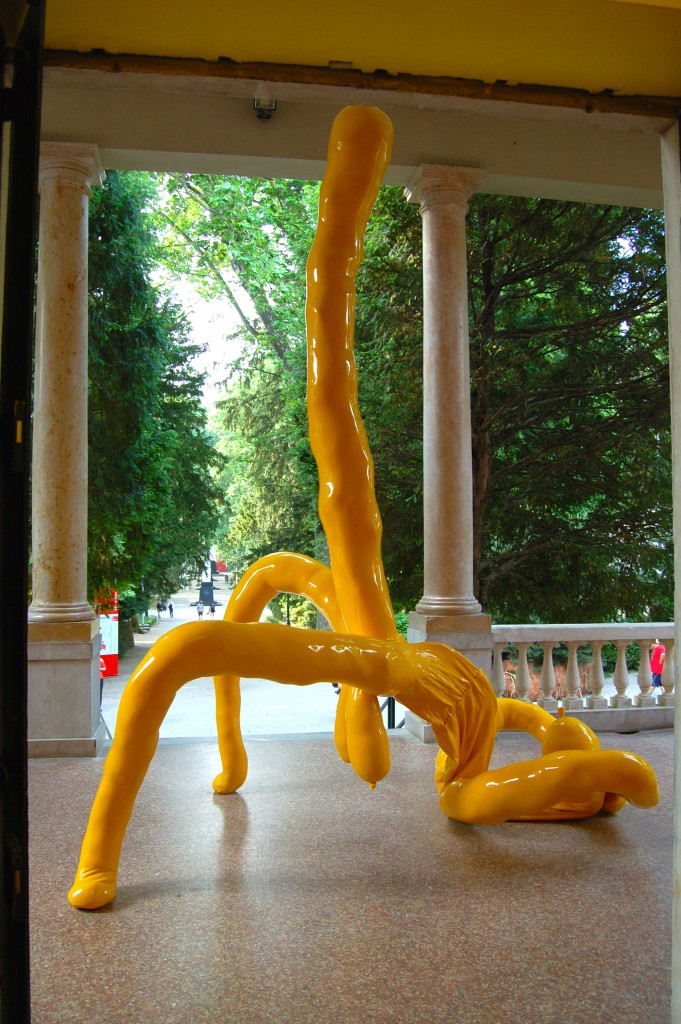 View looking down from the portico of Great Britain’s Pavilion, sculpture by artist Sarah Lucas for the 56th Biennale 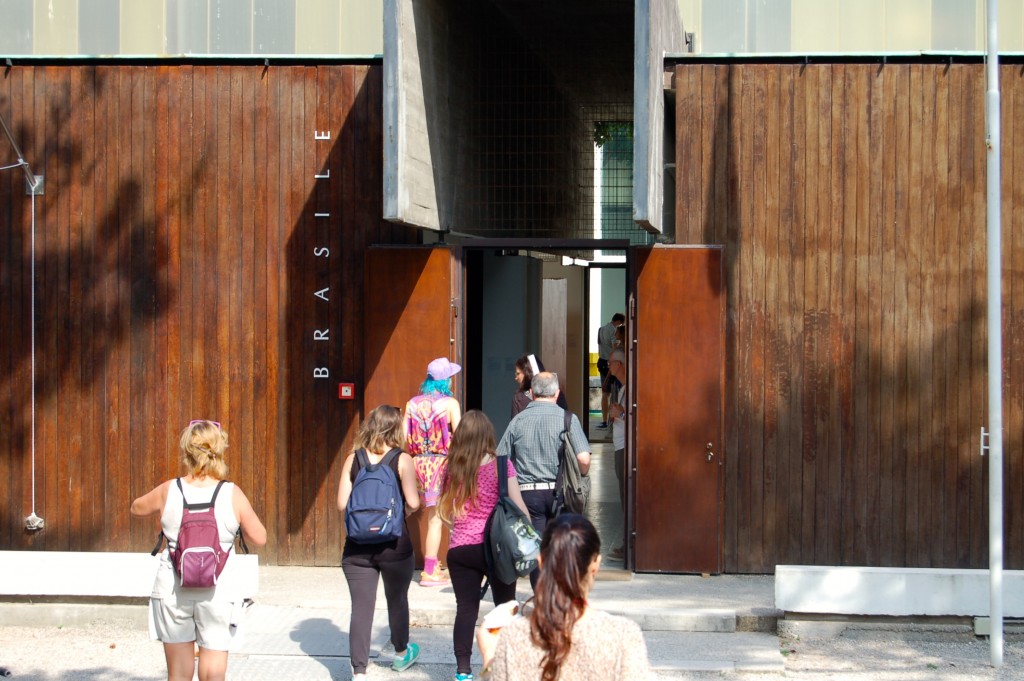 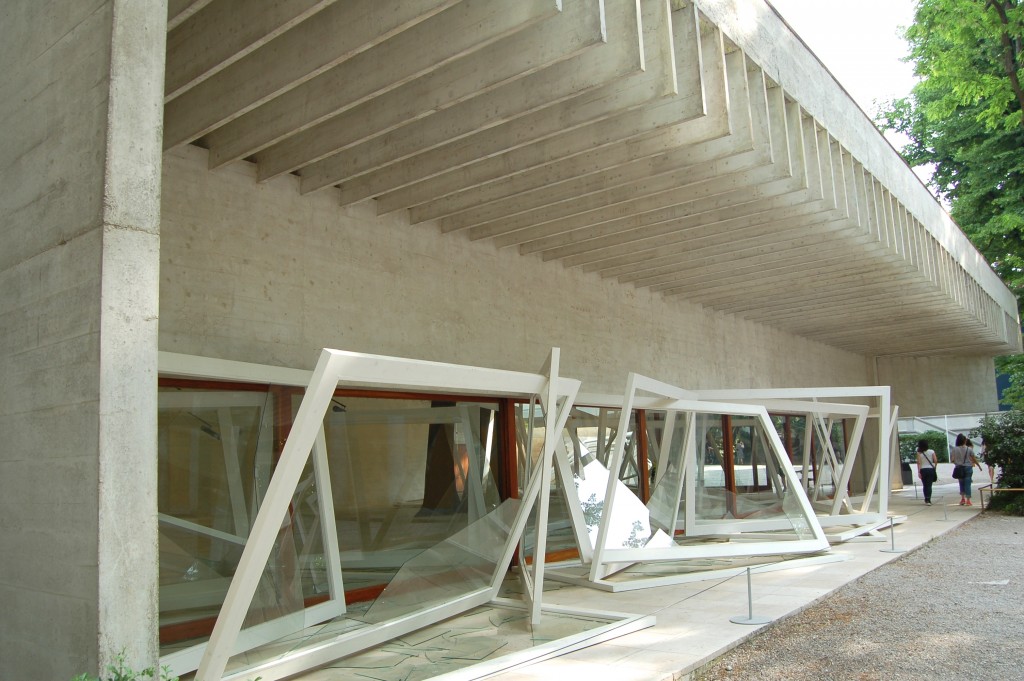 Nordic Pavilion and Camille Normant’s installation for the 56th Biennale

From its beginnings, the Biennale was a showcase for international contemporary art. As it grew to encompass greater numbers of artists, the Giardini proved to be an opportunistic space for countries to establish their presence on an international stage through the construction of national pavilions. Many have referred to the Biennale as an “olympics of art” for this reason (and perhaps also due to the physical exertion of taking in so much art). Some of the earliest Biennale posters emphasize the “world’s fair” like quality to this event. Note all of the country flags in each of the posters below from the 1928, 1936, 1948, and 1952 exhibitions respectively. 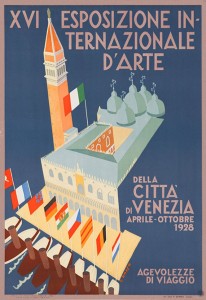 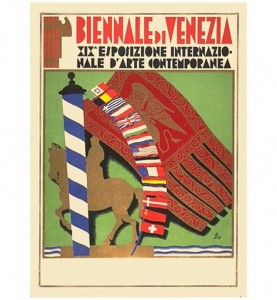 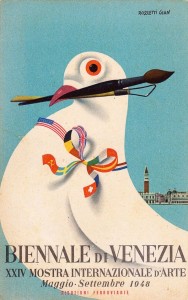 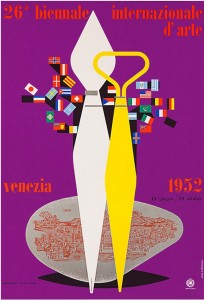 Herein lies the problem that the Biennale has continually faced: how exactly does contemporary art fit into the political and nationalistic equation?

In our increasingly connected world, the cold war idea behind the nation-state is in exponential decline. How does the “world’s fair” model of the Biennale continue to make sense? More to the point, how did it ever make sense? Only in so far as art is viewed as a participant in both the economic and political strength of a country’s identity. This question became increasingly pressing during the Biennales of the 1960s and continues to this day — most clearly expressed in the title chosen for this year’s 56th Biennale, “All the World’s Futures.”

Many recent curators have tried to point out the problems posed by the politicization of the Biennale by “opening up” the art world to those who have previously been excluded or marginalized — third world countries, women, political dissidents, and refugees. While well-intentioned and arguably a sign of progress towards greater inclusion, the fact remains that the Biennale is haunted by a world’s fair type of atmosphere. This tension of how the past affects the contemporary art present is something that will continue to play out and inform future Biennale exhibitions. It will be interesting to see whether the idea of the national pavilion will ultimately be transformed as part of this conversation.

For a fantastic overview of the Venice Biennale check out this video by Oscar Boyson,

A Short History of the World’s Most Important Art Exhibition

Wonderful resource on the history of the national pavilions and architecture in the Giardini: 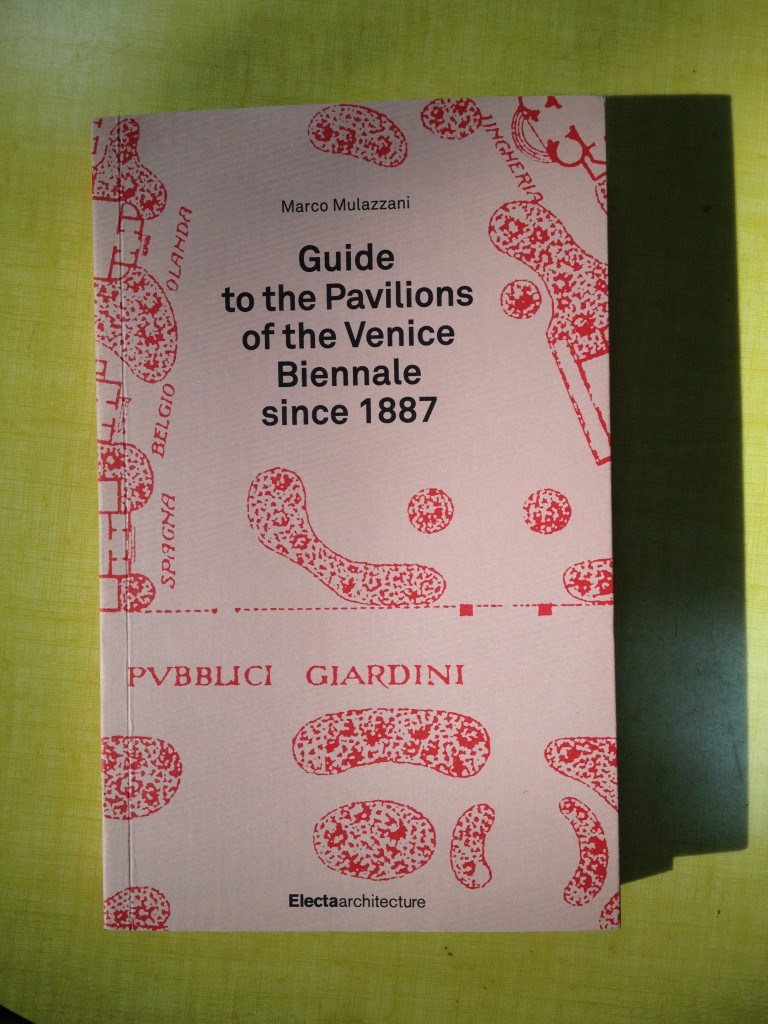 The countries & architects of national pavilions in the Giardini as listed on the Biennale website:

56th Biennale, All The World’s Futures