56th Biennale, All The World’s Futures

The long black drapes and ominous neon sign “Blues Blood Bruise” that adorn the front of the Central Pavilion make the 56th Biennale look distinctly somber. Not surprisingly, the collection of art chosen by curator, Okwui Enwezor, to coincide with this year’s theme, “All the World’s Futures” is pretty serious and disturbing at times. 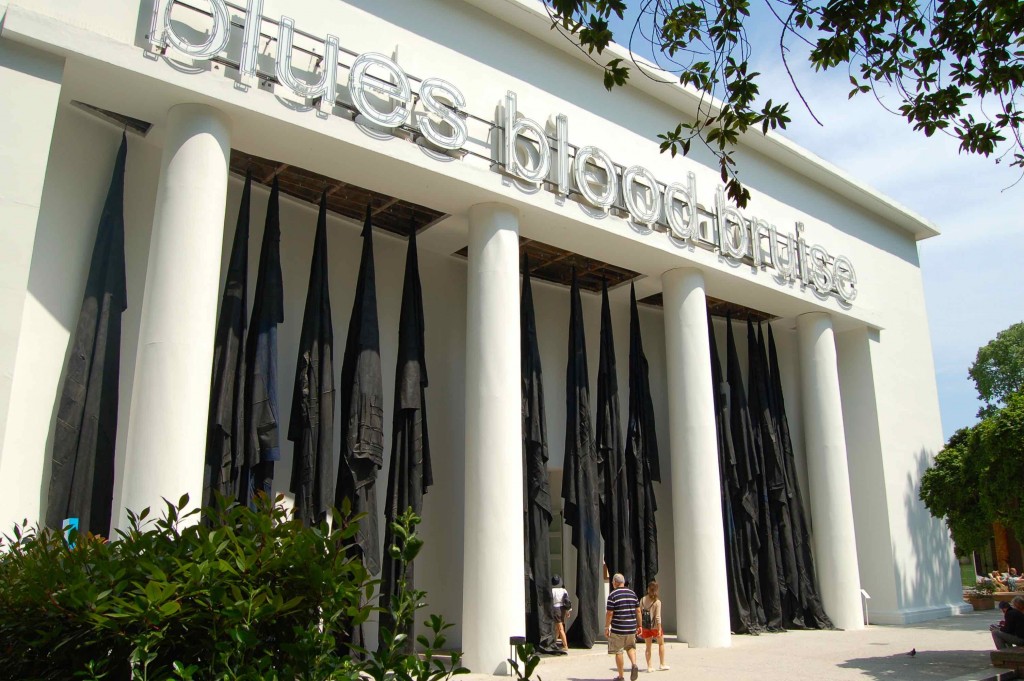 The non-profit Venice Biennale organization appoints a new head-curator for each exhibition. This person is responsible for articulating an overarching idea for the curated exhibitions, identifying artworks and artists that echo that theme, and formally inviting those artists to exhibit in the Giardini’s Central Pavilion and the main space of the Arsenale. These curated spaces are distinct from the art exhibitions organized by individual countries in the national pavilions. The curator chosen for the 56th Biennale is Okwui Enwezor, a Nigerian-born art critic, poet, and educator who is the director of the Haus der Kunst in Munich, Germany. Enwezor is the first African-born curator in the exhibition’s 120-year history. He describes the “All the World’s Futures” theme for this year’s exhibition as “a project devoted to a fresh appraisal of the relationship of art and artists to the current state of things.” This broad scope of an idea seems relatively tame, but in reality the art works he selected for the curated portions of the 56th Biennale are anything but.

Okwui Enwezor’s austere vision for the 56th Biennale has been highly criticized over the past few months. Many proclaim Enwezor’s curatorial choices as overtly violent and political — almost entirely devoid of beauty, playfulness, or irony. While I tend to agree with the predominance of dark subject matter, I do not think it is without merit. Because, honestly, what art is created in a vacuum? Artists are always reacting to their environments whether overtly or not. The artists that Enwezor chose for this exhibition are responding to the catastrophes and tragedies that impact our world. The themes of violence, erasure of identity, and economic and environmental collapse blatantly run throughout the rooms of the Central Pavilion and the tomb-like space of the Arsenale. The tone of Enwezor’s curation of “All the World’s Futures” is purposeful and meant to disturb.

Back to the foreboding Central Pavillion. After passing through the black curtains, visitors immediately encounter Fabio Mauri’s work — a ladder to nowhere — its first step carved simply with “The End.” Accompanying this message are the horrific sounds of a man violently coughing and retching blood from the continual loop of Christian Boltanski’s 1969 short film, L’homme qui tousse. This initial multi-sensory overload marks a descent into the darkness of the Central Pavillion. In this way, the end literally becomes the beginning for the art that follows. 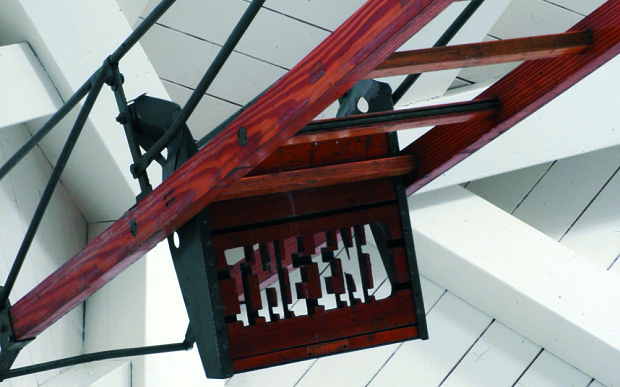 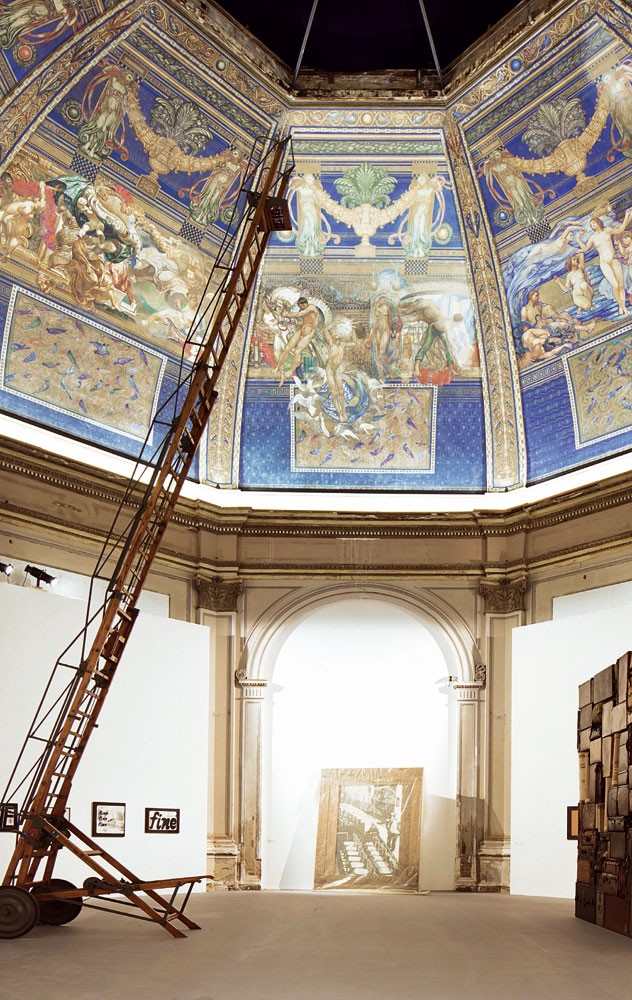 Warning: the film excerpt below is pretty graphic and will probably cause some visual and auditory disturbance.

More ominous messages continue with Adrian Piper’s extensive series of “Everything” works. The repetition of the phrase, “Everything will be taken away” accompanied with the literal erasure of people’s faces across numerous black and white prints makes a strong impact. A panic begins to set in with the knowledge that one cannot really deny this message. We all die and thus in the end, everything will be taken away. 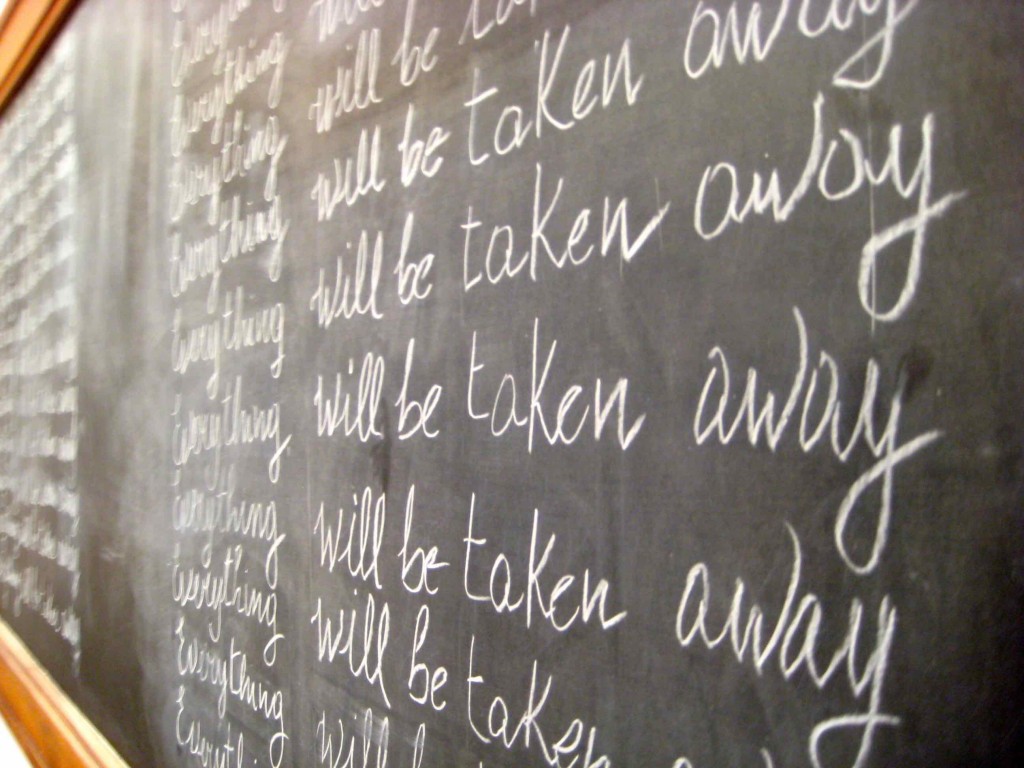 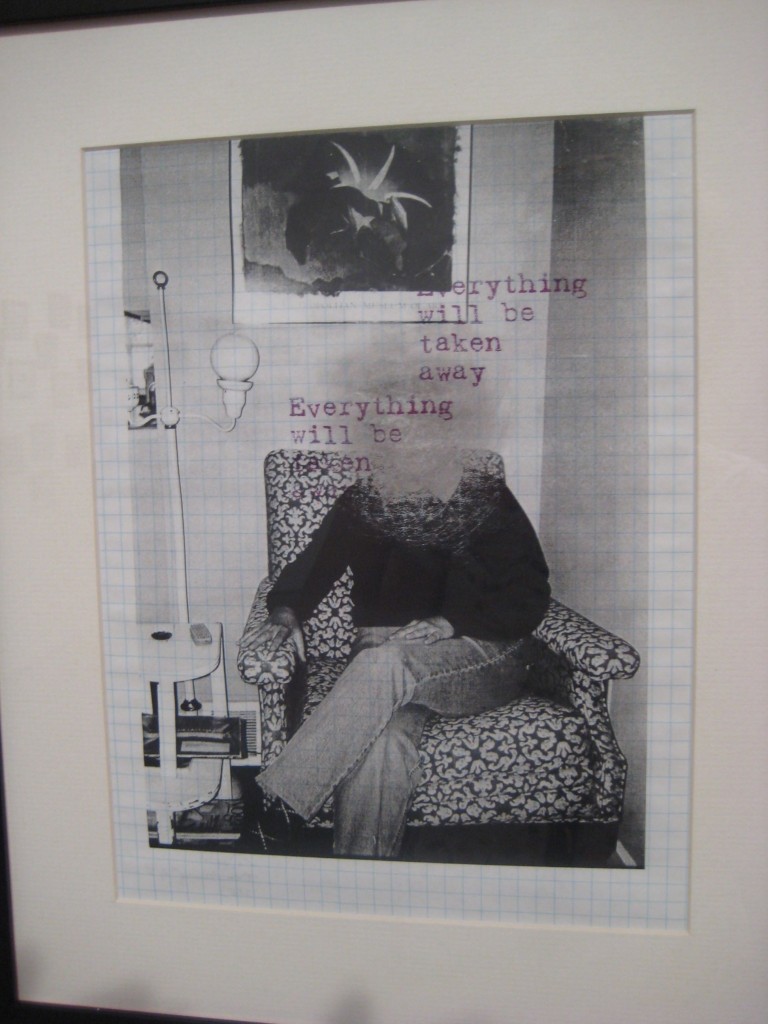 Adrian Piper, from the Everything series

Luckily there are a few reprieves in the Central Pavillion – otherwise no one would ever finish the exhibit or be willing to endure more. One such example are two new paintings by Kerry James Marshall that I’d describe in the style of a psychedelic Rorschach test. It’s quite possible that I was even more appreciative of the color and vibrancy of these works after having traversed through half the gloom of the curated exhibition. They are pretty spectacular large pieces sized at 120′ x 84.’ 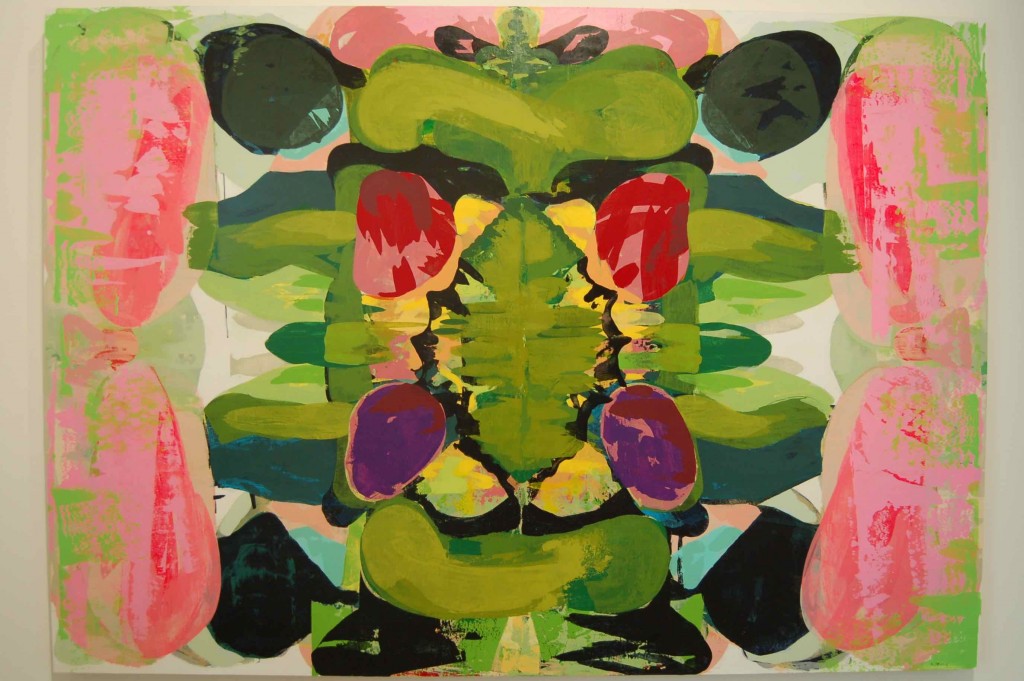 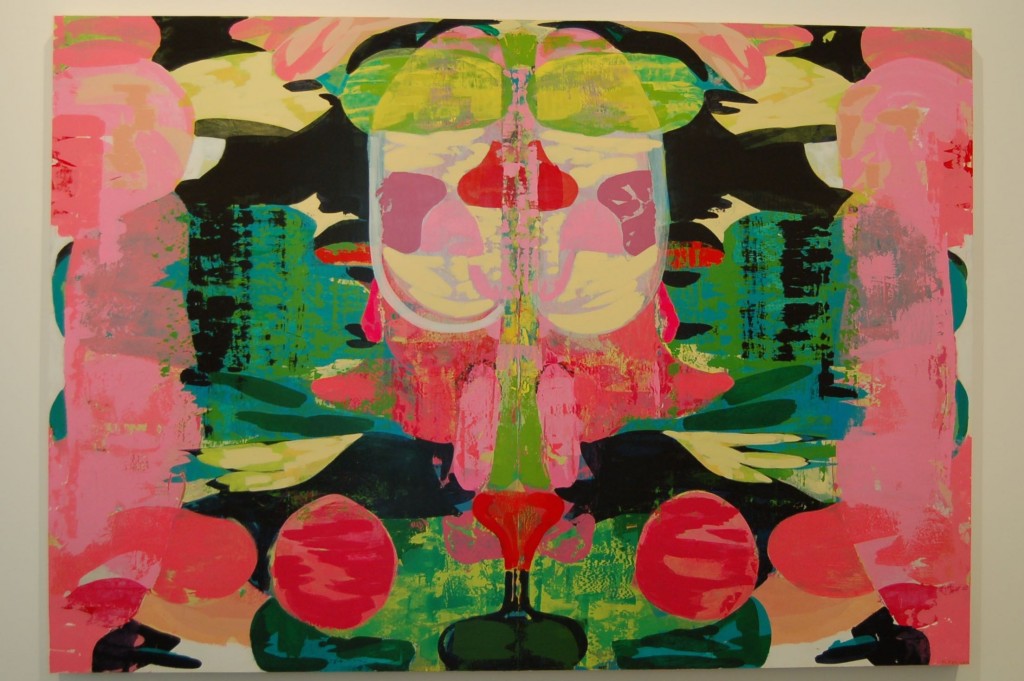 The discomfort provoked by the Central Pavilion exhibition only increases within the space of the Arsenale. Immediately upon entering the first large warehouse sized room, visitors encounter a field of flowers made entirely from machetes by artist Adel Abdessemed who calls the sculptures “Nympheas.” These foreboding blooms are lit by an eerie light that emanates from Bruce Nauman’s neon works surrounding visitors with warning signs flashing from all four walls. 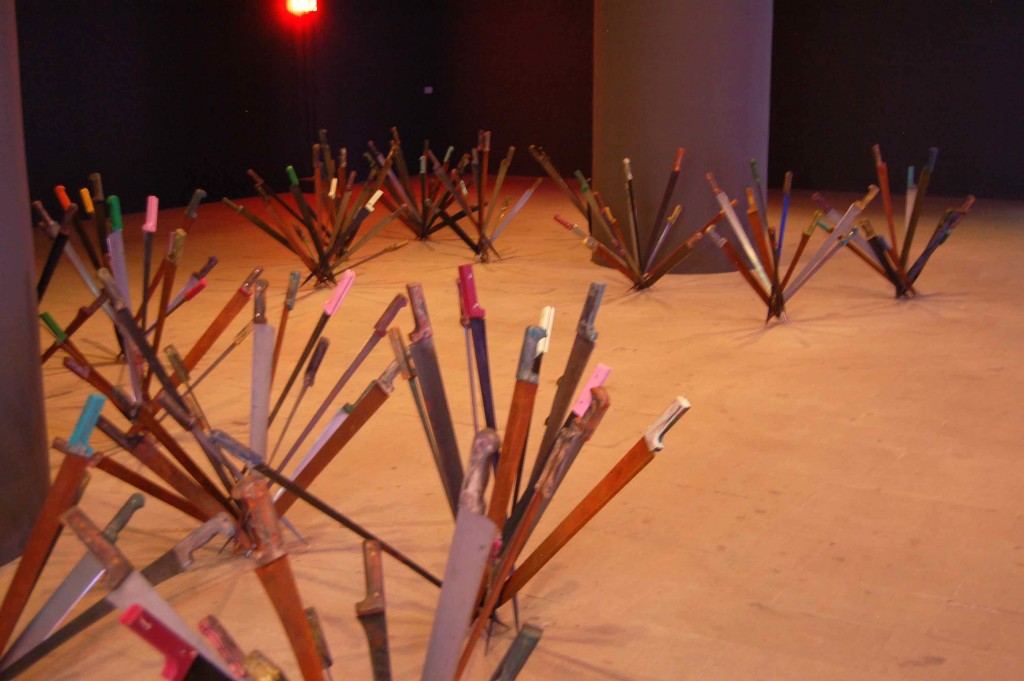 A few rooms further in, a collection of 12 chainsaw sculptures by Monica Bonvicini hang from the ceiling, suspended by chains. The plastic coating that drips off them makes each of these destructive machines seem more brutal and dangerous than usual. It’s as if the metal is melting towards the floor.

Protest art and political overtones abound. Messages from the wood cut stamps of Barthelemy Toguo’s work below include: BLACK LIVES MATTER, RESISTANCE, END POLICE BRUTALITY, STOLEN LIVES, YES WE CAN, JE SUIS CHARLIE, WE ARE ALL IN EXILE. 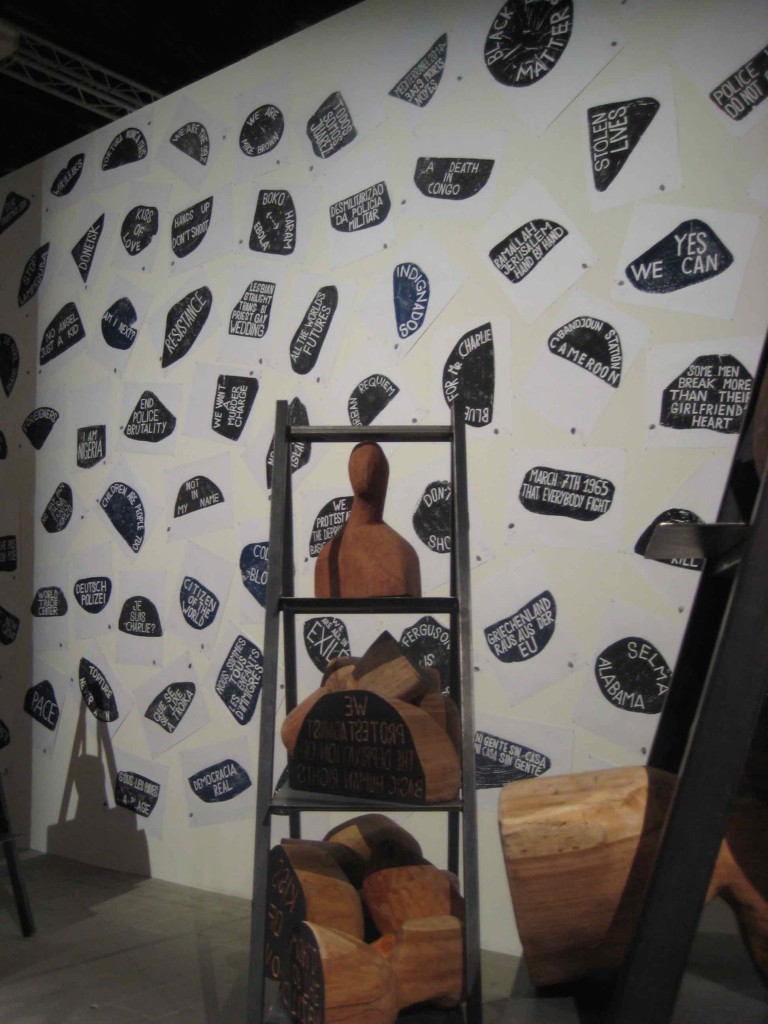 Along the Arsenale’s long brick wall, Natalia Pershina-Yakimanskaya, has created a series of over 20 imaginary protest “signs” designed as clothing to represent different groups who are under or misrepresented in the political climate of Russia. 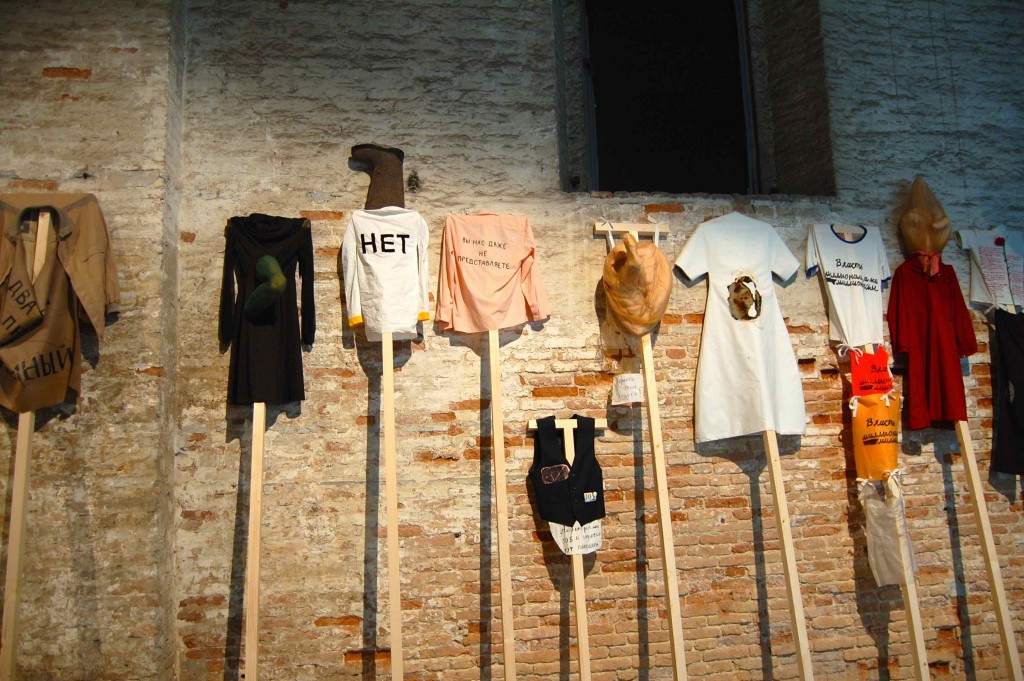 Natalia Pershina-Yakimanskaya, Clothes for the demonstration against false election of Vladimir Putin

Amongst all of this heavy material exists a moment of rainbow-colored post-apocalyptic hope in Katherina Grosse’s installation where the seeming debris of a disaster is brought again to life, complete with sprouts breaking through the mounds of dirt. 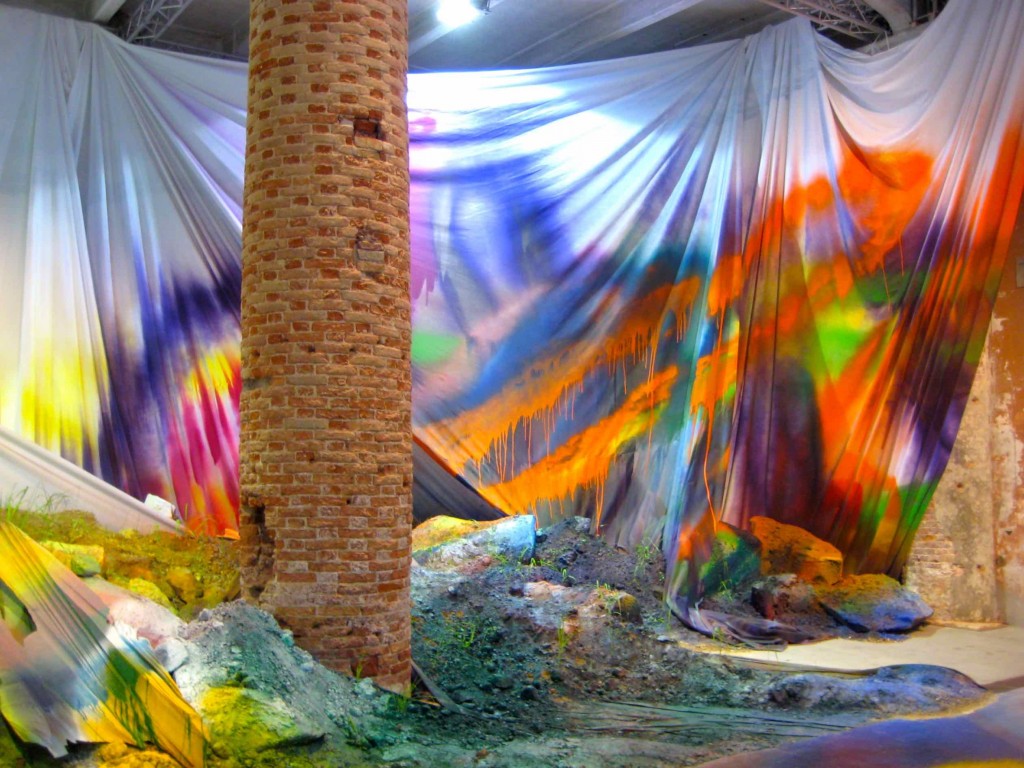 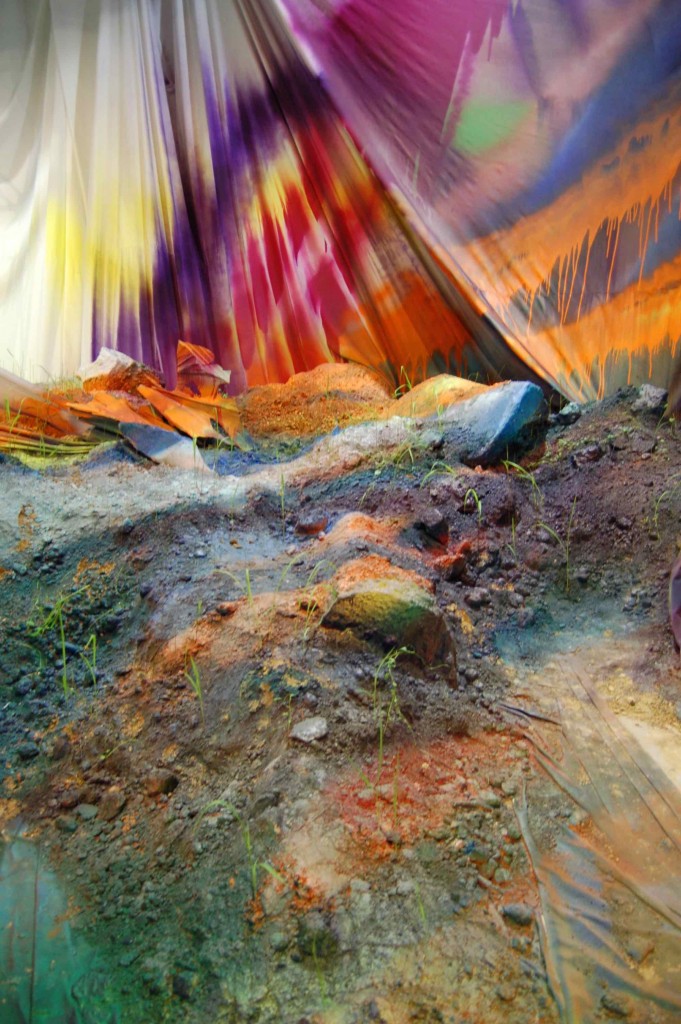 Overall, after having endured the intense subject matter on display at the Central Pavilion and Arsenale curated shows, it’s pretty clear that Okwui Enwezor’s vision for this year’s exhibition is to provoke a sense of extreme unease. But it’s also a reflection on the political and economic underpinnings of the contemporary art world. This is made clear from Enwezor’s organization of an epic live reading of Karl Marx’s Das Kapital in the middle of the Central Pavillion over the seven months that the exhibition runs. If that’s not overtly political then I’m not sure what is. 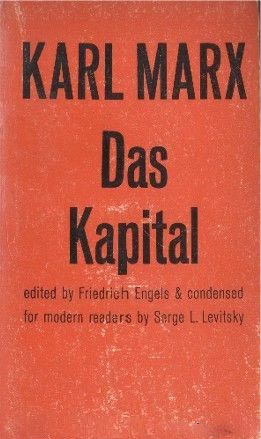 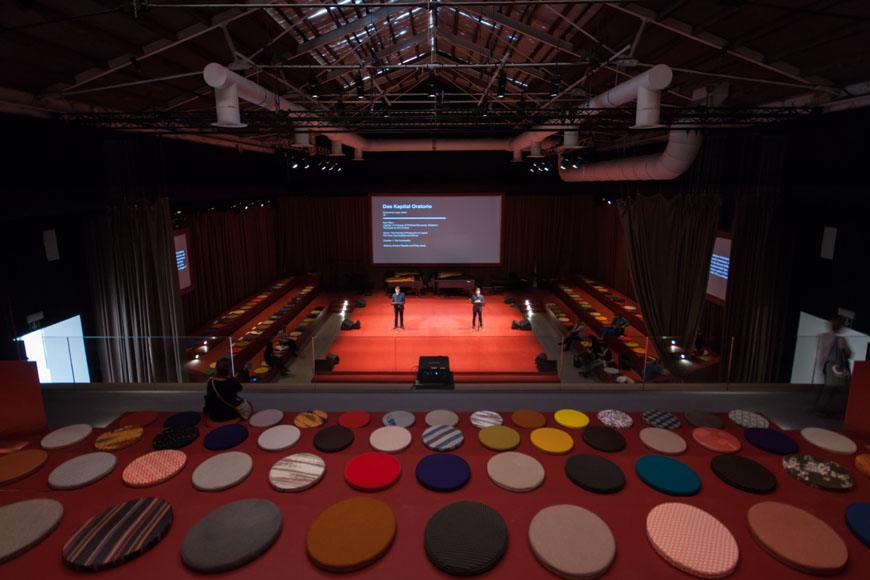 The Arena in the Central Pavilion where a reading of the entirety of Karl Marx’s “Das Kapital” will go on for 7 months, the entire duration of the 56th International Art Exhibition – photo credit InExhibit

What’s interesting is that the economics of the Biennale itself is a topic of controversy. There is much discussion about how the “world’s fair” of the art world has become increasingly influenced by wealthy art investors. While no art is publicly sold at the Biennale, apparently the unspoken understanding is that “everything’s for sale.” However Enwezor does not seem affected by this scrutiny in an interview with Art Net News,  where he explicitly states that: “The biennial is not commercial.” Note: interviewer’s questions in bold below:

Putting Das Kapital at the center of the biennial has direct political implications, particularly at a time when it has been criticized for being increasingly commercial.

The biennial is not commercial.

It’s an open secret that works are sold during the biennial.

That’s not true. I don’t want to hold brief for the biennial, but we have to be careful of the way gossip floats around the art world, because we are all participants. The biennial is an exhibition, and as you well know the art world is a complex ecology. I did not inject Das Kapital into the exhibition in order to talk only about money.

By sidestepping the issue of money that is an undercurrent to the massive financial undertaking of the event and the heartbeat of the contemporary art world, Enwezor ironically calls even more attention to the fact that many art dealers and investors see the Biennale as a monetary playground. 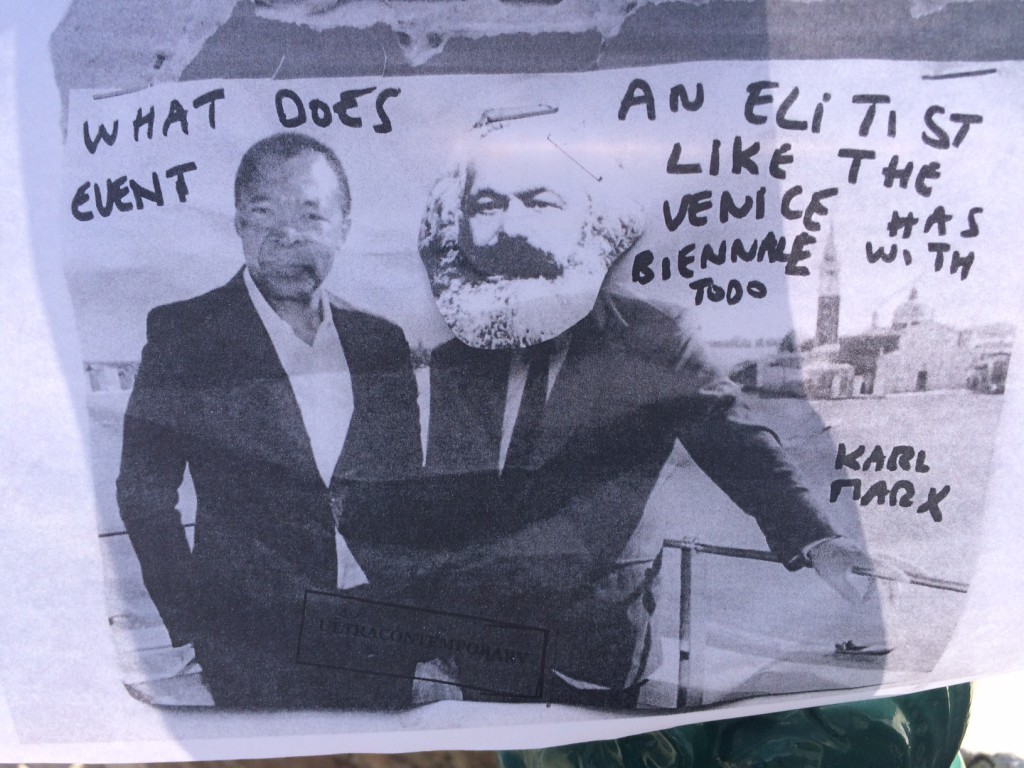 Protest poster found in Venice that reads, “What does an elitest event like the Venice Biennale have to do with Karl Marx?”

As the Telegraph points out regarding Enwezor’s curation of the 56th Biennale: “The anti-capitalist message is understandable, given what the world has gone through since the global financial crisis. But here in Venice it feels ineffectual – and a bit, well, rich. Today’s art world is a playground for the so-called “One per cent.” Just look at the super-yachts lining the Venetian quayside. They’re owned by the squillionaires who fund the art world and keep so many artists in a job. Are we meant to deny their presence?“

At the very least, Okwui Enwezor and his curation of “All the World’s Futures” has people talking about the financial underpinnings of the contemporary art world and the role of the Venice Biennale within its power structures. And the question that Enwzor puts forth to underscore the exhibition is one that will inevitably continue to be answered by the art world:

“How can the current disquiet of our time be properly grasped, made comprehensible, examined, and articulated?”

All photos taken by Miles & Paget Fink except where indicated otherwise